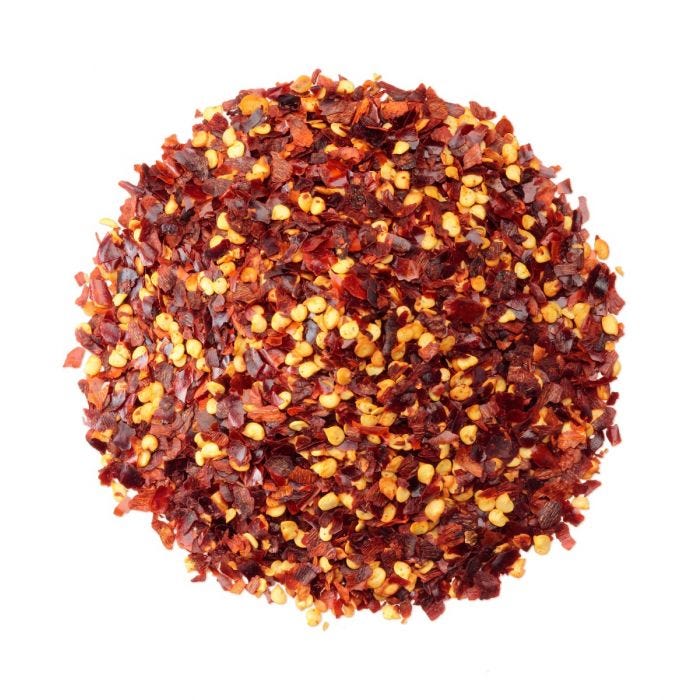 Crushed red pepper is made from a combination of peppers from the capsicum annuum family, such as serranos, jalapenos and ancho peppers. The most common pepper used to make crushed red pepper flakes is cayenne peppers, which is mostly grown in India, the United States, East Africa and Mexico.

Cultivation of the plant was spread rapidly throughout the tropics and sub-tropics by the Spanish and Portugese, which was facilitated by the seed’s long viability.

Olam Spices’ capscicums, that will eventually be mixed into crushed red pepper, are grown in India and processed at our facility in Cochin, India. Our crushed red pepper is made of large flakes of crushed chili peppers and seeds that are medium-high heat.

Crushed red pepper is  a form of coarsely ground chili peppers with the seeds visible. Crushed red pepper provides a nice dash of colour and heat to the food. Dried crushed red pepper is orange red to deep dark red in appearance, often with visible yellow seeds. The level of heat is measured by Scoville Heat Units (SHU). The higher the value, the hotter the pepper. Crushed red pepper is a perfect companion to pizza, eggs, pasta sauce, tacos, stews, casseroles, soups. It is also used in pickling, chowders, gumbos, sausage & in cream and cheese sauces, and marinades.

Crushed red peppers are members of the Solanacae family, also known as the nightshade family. It is believed that crushed red peppers originated from southern Italy in the late 1800s, where people of this region enjoyed adding more spice to their dishes. Researchers have found that southern Italians who immigrated to the United States would grow hot peppers in their gardens, which would make its way into their food.

America’s first pizzeria, Lomardi’s in New York, which opened in 1905 and catered to the large south Italian immigrant population, recalled the use of red pepper flakes in crumbled stainless steel bowls, until switching to pepper shakers in 1950.

Vegan Statement - 2022
Product Questions (6)
Customer Questions
How do I pick up my order from Olam's warehouse?

Olamspices.com is currently serving the contiguous United States. For all other shipments or information, please contact us at OlamSpices-CustomerSupport@ofi.com we would be happy to help service you through our alternative sales channels.  We offer a variety of shipping options depending on your order. We offer FedEx, Freight Less than Truckload (LTL), Freight Full Truckload (FTL), and Warehouse pick-up. You can view our rates on our 'Shipping Rate' page. For live rates, simply add the product to your cart and the rates will be visible on the 'Cart' page.

Read More
What are the pallet dimensions ?

Dimensions: 48" x 40" Pallet Weight: ~40 lbs Our pallet heights vary, depending on the product, but the average is 62". You can find the accurate pallet dimension under the 'Shipping Information' tab on any product page.

Samples are all 8 ounces. If you require a larger sample, please contact us at OlamSpices-Sales@ofi.com.

We offer 5 free samples in a 30-day period. If you require more samples, please contact us at OlamSpices-Sales@ofi.com and we can assist!