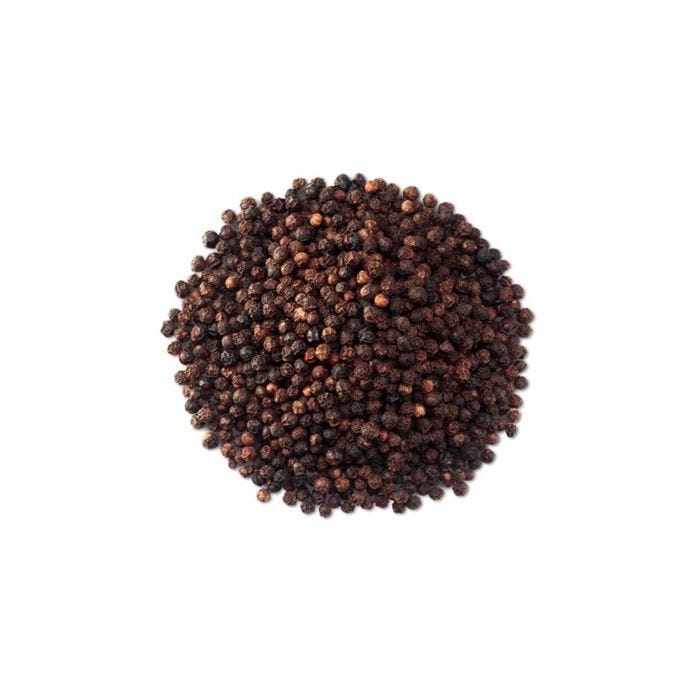 Where is black pepper cultivated?

This household staple is native to the Malabar Coast of India, however, today Vietnam produces almost one-third of the total pepper production worldwide. The remaining two-thirds are cultivated in India, Brazil and Indonesia.

Here at Olam, our black pepper is secured through a fam level sourcing network managed in-origin by Olam personnel in Vietnam, Indonesia, Cambodia, Brazil and Malaysia. We also have two Olam-owned estates in Gia Lai, Vietnam and Bahia, Brazil where we utilize best agricultural practices such as cover crops, compost and digital crop monitoring systems to produce a fully traceable and environmentally friendly black pepper supply.

Black pepper, (Peper nigrum), is a perennial climbing vine of the family Piperaceae that can reach a height of 33 feet and is one of the earliest spices known. The history of this widely used spice dates back to 1000BC and it is believed to have originated in Southeast Asia.

Highly valued in Ancient Rome, pepper was used as currency and even demanded as a ransom when Rome was captured in A.D. 410. This precious spice was weighed like gold and included in overwhelming amounts in many ancient Roman and middle age recipes.

Black pepper (Piper nigrum) is the dried berries of the perennial vine of the family Piperaceae. Black pepper is cultivated in hilly regions of Kerala, Karnataka, Tamil Nadu & North eastern states. Black pepper takes about 7 - 8 months to reach full maturity after flowering. The harvested berries are piled up in heaps to initiate enzymatic browning that results in oxidation of phenolic compounds by atmospheric oxygen. The berries are detached from the stalk by trashing and allowed to sun dry on flat surface. The drying step reduces moisture and helps avoids mould formation. The uniform colour of the black pepper can be ensured by blanching. The mature berries are dipped in boiling water for a minute before drying.

Dried black pepper mixed with extraneous matter like spent spikes, pinheads, stones, soil particles etc is removed by the mechanical garbling of the black pepper. Mechanical Grading is done by using sieves of 3, 4.5, 4.75 and 5mm size.

It is black in colour nearly globular with a wrinkled surface and a bulk density of 500 -550 g/l. The piperine content of MG1 is 4% and above and has to comply to having light berries below 2% and pinheads, immature and broken berries below 0.5 %. Light Berries are berries with normal stage of development but has no kernel inside. Pinhead are very small sized berries that has not developed. Black Pepper has a woody, piney sharp, earthy, bite, pungent aroma and flavor. It can be used as whole berries, cracked, coarse and fine ground form.

Ground black pepper provides an earthy kick and sharp aroma to soups and stews, omelets or meat to season it before cooking.

Vegan Statement - 2022
Product Questions (6)
Customer Questions
How do I pick up my order from Olam's warehouse?

Olamspices.com is currently serving the contiguous United States. For all other shipments or information, please contact us at OlamSpices-CustomerSupport@ofi.com we would be happy to help service you through our alternative sales channels.  We offer a variety of shipping options depending on your order. We offer FedEx, Freight Less than Truckload (LTL), Freight Full Truckload (FTL), and Warehouse pick-up. You can view our rates on our 'Shipping Rate' page. For live rates, simply add the product to your cart and the rates will be visible on the 'Cart' page.

Read More
What are the pallet dimensions ?

Dimensions: 48" x 40" Pallet Weight: ~40 lbs Our pallet heights vary, depending on the product, but the average is 62". You can find the accurate pallet dimension under the 'Shipping Information' tab on any product page.

Samples are all 8 ounces. If you require a larger sample, please contact us at OlamSpices-Sales@ofi.com.

We offer 5 free samples in a 30-day period. If you require more samples, please contact us at OlamSpices-Sales@ofi.com and we can assist!